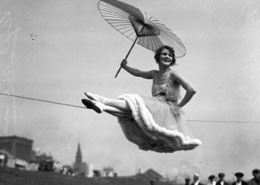 Writers are very familiar with the tension between the fresh-start promise of a potential story and the perpetual pain of a blank page. When the new year turns over, many of us feel the discomfort between productivity and paralysis, too.

Even though the calendar is a construct, we’ve tacitly agreed that it’s a construct that renews itself on January 1. The implication of renewal suggests a new opportunity to rewrite our beginnings and endings, and this heightens that latent tension between doing and dormancy.

While many of us seek to discharge this tension through resolutions–declaration helps to provoke the momentum we need to act–resolutions don’t really work. This may be because resolutions borne out of a desire to discharge discomfort miss the mark.

Feeling caught between possible action and perpetual paralysis is uncomfortable, but we shouldn’t seek to relax this feeling. We should instead think about trying to heighten it.

The push-pull tautness of desire—I want to act; I don’t want to act; I want to act—is elemental. We rely on it, especially the uncomfortable friction it generates, to negotiate a generative balance between activity and rest.

F. Scott Fitzgerald’s oft-cited line suggests something similar: “The test of a first-rate intelligence is the ability to hold two opposing ideas in mind at the same time and still retain the ability to function.”

Reframing irresolution as generative orients it to the future, aligning it with action. Withstanding such tension mistakes the locus of power. When we foster such tension instead, we open wide the world of possibility: “One should,” Fitzgerald writes, “be able to see that things are hopeless yet be determined to make them otherwise.”

This year, let’s think about resolving to work toward the generative balance that tension makes possible. After all, doing so sustains the conditions of imaginative possibility, which gives all action meaning.