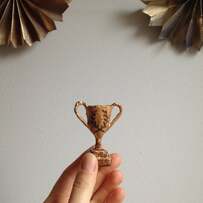 Tiny award available from Tokens and Trophies on Etsy

Micro-ambition, or “the passionate pursuit of short-term goals” is generally attributed to Tim Minchin, an Australian comedian and somewhat of a renaissance man, who advocated for the term in a 2013 commencement address (which offers other truisms that I passionately endorse, including, “There is an inverse correlation between depression and exercise. Do it. Run, my beautiful intellectuals, run”).

That’s why while most of our clients procure our services in the pursuit of macro-ambition, we try to structure our offerings according to short-term goals and the work that needs to be done today. This sort of micro-ambition too neatly dovetails with the uniquely American dedication to life-hacking productivity, but micro-ambition does not advocate for productivity for its own sake. After all, there’s nothing either particularly ambitious or necessarily fulfilling about simply being “productive.”

Rather, we offer micro-ambitious services that we’ve typically described as “strategic.” For example, for an author working on a first draft of a memoir, we offer strategic prompts soliciting tiny stories that contribute to the memoir’s theme. Or, for an author testing out curriculum guidelines for inclusion in a guidebook, we help create smaller strategic publications to determine reader engagement and guideline efficacy.

Strategy has become too encompassing a word, though, probably because it has been just about fully pushed into the land of useless jargon (from which words rarely return). Micro-ambition, though at first glance just as useless, captures for the moment the very small achievements that can elicit the engaged work that ultimately adds up to A Dream, even if it’s not the dream the author first had in mind.

*Minchin’s existential takedown of the lifetime pursuit of A Dream: “[I]t’ll take you most of your life to achieve, so by the time you get to it and are staring into the abyss of the meaninglessness of your achievement, you’ll be almost dead so it won’t matter.”